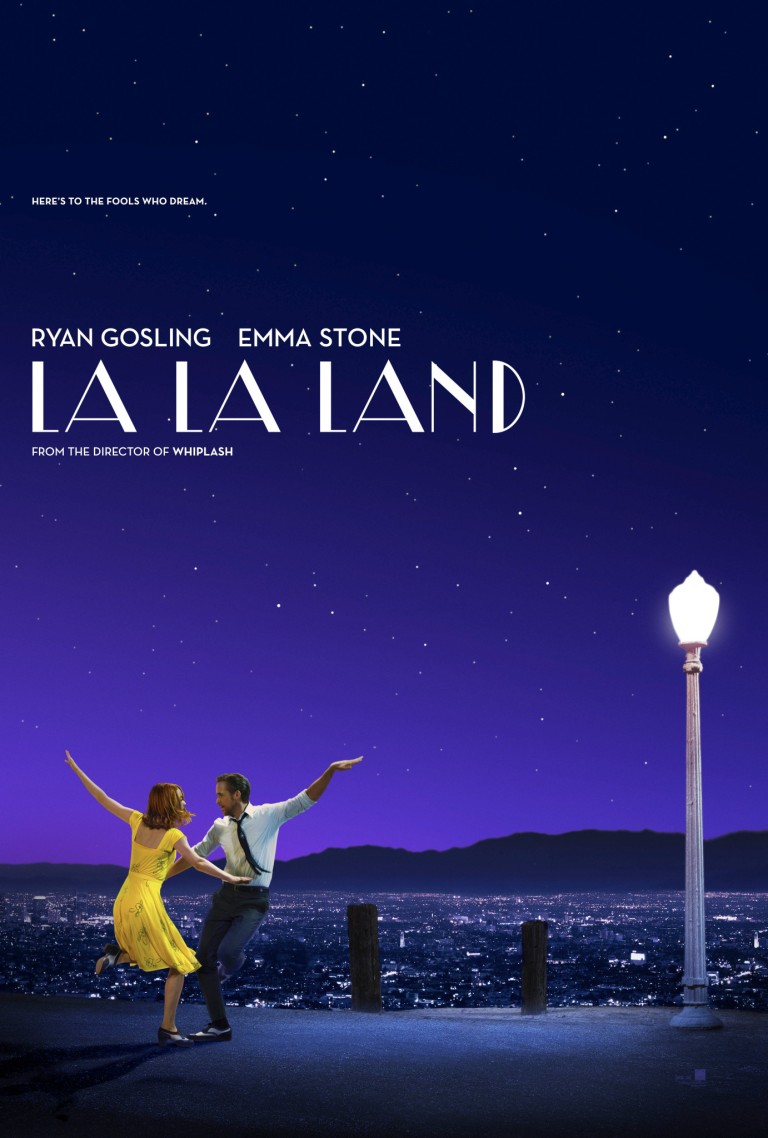 “La La Land: La, a Note to Follow GOAT.” Conclusion: 10/10. I was fortunate enough to be able to attend an advanced screening of this movie and it was hard to keep my expectations in check with all I’ve heard about it and this movie absolutely delivered. The musical numbers were outstanding and well choreographed. One of the best opening acts I’ve ever seen in a movie. Gosling and Stone give complete performances and their chemistry together is palpable. The second act slowed things down a bit, but with the ending it set up, I have no issues with it. Well shot and lit movie – I was very impressed with the production value. Cannot recommend a movie (in general terms) more. #TheBandOfOpportunity #LilSebastian #AreYouGoingToBoiseBecauseYoureTheOnlyBoyISee #IdTapDanceThat#MammaMia #TrafficJammin #HornBonk

‘La La Land’: Business As Musical. conclusion: 10/10. Kelvin and I got to see it a month early, and we got the front middle rail seats in the press section, and sitting directly behind us was THE Tara Hitchcock!!! this movie is amazing, best film of the year, and I’m gonna go ahead and predict that it will win the Oscar for best picture. the opening sequence provides an amazing start, and the tone and comedy of the first act is perfect. although the middle drags a little bit, Emma Stone and Ryan Gosling are amazing throughout, and the music is beautiful. the ending is perfect and provides a satisfying conclusion and even more amazing music. see this movie when it comes out!! #lalaland #allthatjazz #getyouractingtogether #rhymeorseason #elevatehermusic #danceencounter

La La Land: “I Can Feel You Loving Me, That’s Palpable”. Rating as follows:

I was told this was “the best movie of the year” going into it, and figured it was an exaggeration. Is it possible that it’s actually an understatement? This could be one of the best movies you’re going to see for a few years. While this type of movie is not going to resonate with everyone, this is the definition of an incredibly well done movie. It’s completely unique from any other movie I’ve seen this year, which really sets it apart. I love movies that use long takes and camera movement. It takes a lot of coordination, but it’s so beautiful when done well. I had a really hard time deciding it’s best category, as it could have been Score, Cinematography, or others. Incredibly entertaining, very well acted, musically simple yet powerful, and a real must see on the big screen. Go today, like now. Only negative points I gave, and they are quite picky: some of the motion blur during the pan shots held on for too long, John Legend was good but not great, and it had a nice message but not overly profound. But that’s it, hence the very high score. It will be hard pressed for anything to get that high in the future (until Dunkirk comes out). #MamaMia #seBastianofHope #OldPeopleInTheatersAreTheWorst #IdontKnowWhyItsCalledSebs #HadToBeThere

Jarrod Says Hats Off:
#84 Film in 2016: La La Land 10/10 Where do I begin? So last year I thought Sicario was the best film of the year but my favorite film was Mad Max: Fury Road. This year the best film was Manchester by the Sea but this is easily my favorite film and an extremely close second for best film of the year. This is one of those movies that really breaks down barriers. People whom don’t even like going to the movies often or whom don’t like musicals can all really find something to love here. This movie can be enjoyed by pre-teens all the way up to senior citizens. Stone and Gosling’s chemistry has never been better, the production values (cinematography in particular) are jaw dropping, the feelings this film will stir up inside of you, both happy and sad, are why we go to the movies in the first place. Original musicals not based off of a pre-existing Broadway show are almost nonexistent these days so to have one with such strong music and lyrics is an unbelievable breath of fresh air. It harkens back to the MGM musicals of old while also feeling current, contemporary and relatable. The ending I initially had mixed feelings on but upon my second viewing, there is really no other way to end it and I love it. I have a couple very minor nitpicks that make this film just a hair under Manchester by the Sea but even those complaints don’t take away from my enjoyment of the film, hence the 10 out of 10. I can see this film being one I revisit time and time again after a good day or a bad one and one that just puts you into a good mood. This is why I go to the movies and I urge everyone to see this movie (it will get an IMAX run in the not too distant future).
#JohnLegendsOfTheHiddenTempo / #TrafficOnTheGleeway / #LaLaLandBeforeTime / #ImGonnaJazzMyPants / #MammaMia / #IntergalacticPlanetariumPlanetariumIntergalactic
Guest Hat: Hunter Says Hats Off:
Just saw La La Land: Blah Blah Bland 9/10

When the movie was over and the credits began to roll, Cassidy and I had communicated through telepathy, and decided to buy tickets to the very next showing 15 minutes after. This was a terrific movie and definitely the best movie I have seen this year, which is saying a lot, because I saw every one that came out. Being a musical I am surprised I am saying that, but this film had a overwhelming message, star studded cast, talented director, and some sweet ass jazz. The story was realistic, plot good, characters good, zzzzz etc.

Hold on to your butts, its about to get hot in here.

To be a actor in a musical you must be a phenomenal singer, actor, and dancer. Whether Ryan Gosling and Emma Stone had the potential to be great at all three, it definitely was not portrayed #hottake. The acting was perfect, the singing was good, but the dancing was elementary #firetake. They were chosen because they have great chemistry and the casting director knew people would love them. It is a shame that we didn’t get to see this movie with the first picks #thirddegree. The music was exciting and perfect, but all it was was really good jazz. I would still never pass up an opportunity to watch this film, even if that means cringing during every dance number. #oops

I recently saw ‘La La Land’: Hello, It’s Mia. conclusion:10/10. What can I say, it’s everything I want in a movie. It perfectly captured the glamor of an old Hollywood musical while still being incredibly modern and fresh. Emma Stone and Ryan Gosling. Need I say more? The music left me jazzed, obviously. The script was incredibly well written and said so much about the state of the film industry and progression of art itself, and as a fool who dreams I was left more inspired than ever. As the credits rolled I was found rolling on the ground at how awe struck I was with this film. This may be a bold statement, but I would say it is my favorite movie of all time. #getjazzywithit #ihatejazzjk #imtakingthechickenoutyourclub #andirantogetanotherticket #boomreviewed