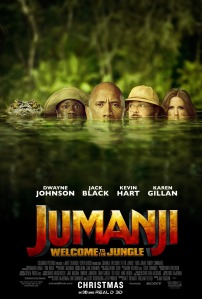 Saw Jumanji: Rumble In The Jungle

Don’t get me wrong, this movie was really funny and I LOL’d (literally) more than probably any recent movie I’ve seen in theaters. Very funny, and fun. The cast did a great job as well, hence the high marks in acting. Jack Black and Kevin Hart were hilarious, with The Rock and Karen Gillian doing a pretty darn good job as well. However, it’s just a silly premise and a ridiculous movie. These are nice to see every now and then because it isn’t about some sad jerk, or some terrible thing that happened years ago, and it takes you away from reality for a bit. But that’s all it really is. If you want to laugh, go see it. If you want to wait until it is available to stream or rent, probably a better idea. #HartTheHeraldAngelsSing #RockNRoll #WelcomeToTheFumble #TheresANiceWayToSayThatKaren

Just saw “Jumanji: Welcome to the Jungle – You Only Live Thrice.” Conclusion: 7/10. While a movie like this only has so high of a ceiling, this one pretty much hits it. It’s silly and the visuals are cheesy. However, when the movie tries to have a candid moment, it works pretty well. Just as importantly, the humor resonates also. Jack Black is especially hilarious, but all four of the main, game “characters” do an excellent job of exhibiting their “player’s” personal characteristics and traits. This creates some rather amusing juxtapositions – especially in the Rock and Kevin Heart’s characters. Part of what the film does so well is just delivering on what it’s selling. The plot unfolds in a very videogamey manner and I think in general terms for movies, it’s not hard to get on-board with a silly or outlandish concept if the movie does a good job working within the logic it creates. In that sense, it is believable and it allows the audience to accept the premise and enjoy how the movie plays with its characters. For this movie, I think that enjoyment takes it pretty far. #HungryHungryHippos #SaveMartha#DanceDanceExecution #BazaarFoods #FifteenMinutesOfGame#TheJungleCrook #RockOfStages

Just saw ‘Jumanji: Welcome to the Jungle’: Video Game High Schoolers. Conclusion: 8/10. This is my kind of movie. It’s an improvement over the first Jumanji (not hard to do), mostly because it is set inside a video game which allows for a lot of creativity and uniqueness in the story-telling. This movie is also hilarious! Seriously, it’s likely the funniest movie of the year. But the true magic of this movie is that you have great actors playing characters that are nothing like them, because they are actually just ridiculous high schoolers. Jack Black and the Rock give their best performances in awhile, and although Kevin Hart’s acting didn’t quite match his character the way it should have, he is still very funny. Definitely a fun watch,with fun characters and visuals, that doesn’t take itself too seriously. #avatar5 #levelheaded#3livesmatter #imthemap #myweaknessesareactuallystrengths #callanimalcontrol