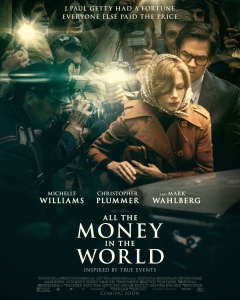 Just saw “All the Money in the World: Getty Out.” Conclusion: 6/10. Pacing is a crucial aspect of film-making. While this movie has some very interesting thoughts on wealth and greed, it’s like a match that won’t quite light. For that, the pacing is somewhat to blame. It’s really slow and director Ridley Scott (The Martian, Alien), with a 132-minute run time, is in no hurry to move things along. What’s frustrating is that there is some very good stuff in this movie. Christopher Plummer, infamously replacing Kevin Spacey at the very last second, is phenomenal. Of all the characters, his receives the most maturation and he soaks in all of it. Michelle Williams (yes, she cries) does very well with what she is given, but she, along with most others, simply are not given enough to do. I would think for a movie about the kidnapping of her character’s son, we would understand the trauma she feels and how she goes about dealing with it. With some of the perverse family politics at-play, I would double down on that statement. However, nothing really materializes and that’s pretty much the same story thematically. Scott hints at ideas of how excessive, rather, offensive wealth creates an inherent moral rot. The rich tycoon is seen as being as immoral of a person with regard to money as the ransomers. The comparison drawn is subtle enough but it isn’t given room to mature. Scott keeps striking at different ideas, but can’t quite get anything to take. #StormyGail #ChaseClosed #BrownEyedRansomeMan #ThePursuitOfMoneyCantBuyHappiness #FactorsOfAbduction

Saw All The Money In The World: Mo Money Mo Problems

Ridley Scott’s latest film explores a moment in the life of the cheapest man ever to live, J. Paul Getty. After his estranged grandson is kidnapped, Getty and the boy’s mother, played by Michelle Williams, go at it to try and get him back. This movie made headlines when it decided to remove Kevin Spacey from the film; which is no small task when he’s playing one of the main roles! They managed to re-shoot, edit, and market this movie in a matter of a few months to hit the Christmas movie season. Quite impressive. As far as the movie goes, I enjoyed the drama between Getty and the boy’s mother, and the struggle to pry money away from a billionaire who just wants more. It is definitely slow at times, and is fairly flat for the first half or so. However, the movie picks up and creates some excitement at the end. It was pretty well written and shot, and I enjoyed seeing it on the big screen. Probably worth a wait to see it at home when it’s available though. #GettyRichOrDieTryin #WheatfieldChase #LendMeYourEar #ItalianJob

Just saw ‘All the Money in the World’: Enemy of the Estate. Conclusion: 7/10. This dramatic thriller is good, but it’s never all that dramatic or thrilling. The performances are good all-around, and Christopher Plummer does an amazing job as J. Paul Getty, especially having to shoot all of his scenes in just a couple weeks. The writing is pretty good, but I never felt any strong emotional connection to the characters, so the movie seems a bit bland and forgettable. #ransomnumbergenerator #Taken4 #cuttotheChase #Gettylarceny #toorichformyblood