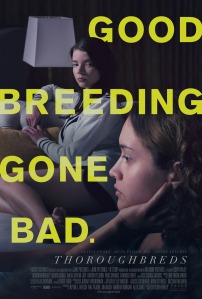 What an interesting movie! The premise is quite intriguing, and the movie doesn’t give much information about the characters until later on, which works well and builds suspense. The acting from Anya Taylor-Joy and Olivia Cooke is really great, the cinematography is well-crafted, and the music was strange but engaging. My biggest complaint about this movie is that the plot is lacking a bit, and the ending feels incomplete. #wecouldhavebeenkilledorworseexpelled #watchyourstep #crazyhorse #likealambtothedaughter

Recently saw “Thoroughbreds” – My Mare Lady. Conclusion: 7/10. The premise is about as dark as a dark comedy could offer – two high school girls plot and consider killing one of the girls’ dads. The seriousness with which it treats this premise is extremely funny at times. Both the girls are of very privileged and well-to-do backgrounds. The movie balances a thin line of making them likable but bad people. It is interesting, also, how the movie seems to examine how out-of-touch people’s problems can become the more removed from the real-world they are. Combined with its look female friendship, there is a lot this movie offers and it’s a credit to the director, newcomer Cory Finley, that he can string it all into a coherent and rather funny film. Certainly, he is helped by two solid performances from Olivia Cooke and Anya Taylor-Joy, but he deserves a lot of credit for this under-the-radar gem. #AmandaPlease #MarkedMan #LilyLittleLiars #DarkHorse #TheWalkingDad #CantStartTheFeeling #FatherCrime