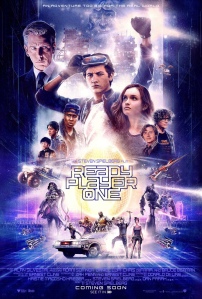 Just saw “Ready Player One” – Hallowed Be Thy Game. Conclusion: 7/10. A childlike wistfulness and nostalgia are perhaps Steven Spielberg’s greatest movie making tools. However, this might be the first time a movie of his has been so overtly founded upon those characteristics. In this sense, the movie is true to its source material. Really, that’s the proposition the movie is offering. It’s totally self-indulgent in its nostalgia and referencing, but that’s kinda’ the point. While the movie tries to hedge itself, it’s not doing much to examine how ingrained escapism has become in our culture. I wish it would have tried for that but that’s just not who Spielberg is. If you can accept that premise, the movie is pretty fun. It wants to get you caught up in all its referencing and whimsy and it’s hard not to. While there are some things that took me out of the movie, most of them relating to Ben Mendelsohn’s villain character, it stays in its lane petty well. As for some of the more technical aspects, the motion capturing is impressive. Much of the movie relies on characters rendered through motion capture and the quality of it complements the feel of the movie perfectly. It garners the air of a video game in every way. My only wish is that the visual ambition would have been met with a greater narrative one. #PlayerOneGotSmoked #HallidayIn #DontWadeUpForMe #SheShouldntBeAnyTroubleToFindShesAtremis #ScrambledEasterEggs #TwoMorrows #VirtualRealityCheck

This film is so fun to watch, that it’s hard not to love. As for the negatives, there isn’t a ton of character development, and the pacing is a little off, both of which are common of films derived from books. In terms of the positives, there are a lot. The characters are likable, and the acting is great all around. The directing and writing are pretty flawless, and just about every attempt at humor worked well. The visuals are incredibly good and helped to keep me engaged. The adventure of the film is fun and exciting the whole time, and it’s a blast to watch. #thebooksdontmatter #thatsgonnahurtplayerone #danceexmachina #extralifelessons #keystosuccess #virtualrealitycheck #passbackwards #oneshiningmoment #happygochucky

What a fun movie! I’ve never read the book, so I didn’t have any preconceived ideas about this movie headed into it. But, I do have a past filled with video games, so I was excited to see this movie. I really enjoyed it. The animation and cinematography were amazing. The worlds were beautiful and just fun to be in. Loved the race and dancing club scene the most. This movie has a very engaging story as well. I loved all the subtle and not-so subtle nerd humor throughout the movie. There were a few big holes in the story, but they weren’t deal breakers, and a few of the actors weren’t great….but it didnt take much away from the movie. We saw it in IMAX 3D and it was really awesome. I’d definitely recommend seeing it in theaters if you can. Doesn’t have to be IMAX, but it’s a good candidate for that kind of experience.