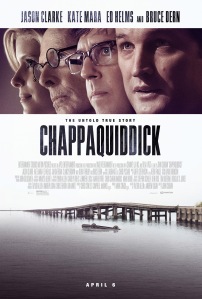 Chappaquiddick had a chance to tell a pretty remarkable story. It happened awhile ago so many of us have no idea that this even happened. But, it presents a very real and present question: how much can our politicians get away with before the public will turn on them? This movie attempted to have that discussion, but it was just flat. The movie in general just wasn’t super interesting. The bright spot was Ed Helms shedding the idiot, frat boy typecast that he has, to portray a more serious role which he does well. Other than that, there wasn’t much else to excite me. Oh well.

If they had delved more into the characters and their emotional struggles, I think it could have been more impactful. But as is, it just feels a little bit like a history lesson. Interesting story, and the acting is certainly quite good, but it falls a little flat. At least the score was decent. #overthemoon #letthatsinkin #thisisnotmybeautifulwife #waterunderthebridge #Tedinthewater #scubadriver

Recently saw “Chappaquiddick” – Night of the Living Ted. Conclusion: 6/10. For a political movie, this movie tries very hard to be apolitical. It does well examining the Kennedy aura and all the wrangling and maneuvering that is involved in this story. However, it does not go any further in trying to make a larger point either about the Kennedy family or politics in general. The nuance is there, but there is not a whole lot of depth. I liked the performances enough and Jason Clark brought some of the needed emotional complexity in his portrayal of the senator. Aside from some of these compelling portrayals and story points, the movie doesn’t strive for more than what amounts to documentarylike reenactments. #TedTalks #MarthasSinYard #BridgeOverTroubledWater #ChapAcquitted