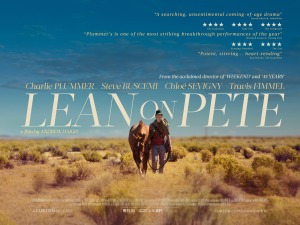 Just saw “Lean on Pete” – Charley’s Horse. Conclusion: 9/10. Roger Ebert’s famous line of, “the movies are like a machine that generates empathy,” resonates eternally thanks to movies like “Lean on Pete.” There’s an extra weightiness to getting movies about people seldom afforded their time on screen right. Director Andrew Haigh allows things enough room to breathe that they really formulate into something spectacular. Focusing on a poor teenager named Charley, the movie follows him and his crossing of paths with a diminishing racehorse, the titular Lean on Pete, as he takes up a summer job working for a trainer named Del, played by Steve Buscemi. For as much as the movie is about someone like Del – people who, for whatever reason, become weary and stuck in a place they don’t really want to be in – it also examines what can keep people there. Still idealistic enough, Charley hasn’t become jaded to the realities of the world but his pursuits often times appear to be frivolous pipe dreams. To its credit, the movie is never judgmental or dismissive of Charley – it merely seeks to observe, rather heartbreakingly often times. For their part, Charlie Plummer as Charley and the aforementioned Steve Buscemi are spectacular. Buscemi has been on a roll of late between this and “The Death of Stalin.” Though not to be overlooked by its subjects, the visuals are also fantastic. The movie is filmed in a part of the country that looks great naturally, but it feels emotional with the warmth in which it is shot. And for being a low budget operation, there is one scene that is particularly impressive with how real it looks. That artistic vision and emotional rawness do combine into something very special here. #GoToDel #HomelessnessIsWhereTheHeartIs #SomePeopleAskWyomingIAskWhynotOming #AllIDoIsLynn #TheAmazingRacehorse