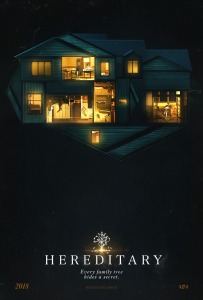 Recently saw “Hereditary” – Mother, Daughter Trance. Conclusion: 9/10. While there have been some impressive directorial debuts in 2018, Ari Aster’s might prove to be the most impressive yet. As far as themes go, few are more universally relatable than family baggage and skeletons. Aster’s spin on that conceit is as gripping as it is unsettling, which is to say, quite. From the onset, this movie is downright eerie. It builds and build while peppering in moments and clues of what is to come. The extraordinary Toni Collette plays Annie, a mother to Peter and Charlie and wife of Peter. As the movie opens, it is revealed that Annie’s mother has passed away and that the two have not always had such an easy relationship. As soon as that much is revealed, we see the family dynamic start to unravel and secrets start to surface. Toni Collette is masterful the entire way and she is without question a force to be reckoned with in this movie. We see things through her eyes and once the second half kicks in, the movie airs it all out. It feels as though we’re riding a roller coaster blindfolded. The more the movie builds things up in the first half and the longer that building goes, the more the dread of that eventual drop beings to set in – and it becomes more apparent just how big that drop is going to be. Aster’s patience in this sense is masterful. While things wrap up in a manner that feels a bit familiar, the ride to that point is anything but. #CharlieNeedsAChaplin #IllJustHangHere #BurningMan #TheDevilWearsNada #BaalInTheFamily