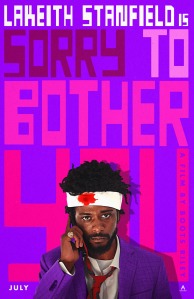 Recently saw “Sorry to Bother You” – Call It Quits. Conclusion: 8/10. If you’re first-time director and hip-hop veteran Boots Riley, you might as well throw every idea you have at the wall and see what sticks. For 111 minutes, that’s roughly what happens. Many of the ideas, including the central conceit of the movie – a black telemarketer, Cassius, finding his inner “white voice” that leads him to professional success and the greed that comes with it – work very well. Being able to take themes of class, race, and critiques of capitalism and blending them together into something hilarious and original is among the most impressive accomplishments in film this year. Speaking to these issues in a provocative way without being preachy is a difficult line to toe. Lakeith Stanfield is fantastic in his role as Cassius Green, and as a stand-in for the viewer, the things that happen in the movie are not lost on him. Inevitably, Riley lands most of his ideas but some of them are left a bit wanting. In this regard, it sometimes can feel like barrage of abstract expression rather than a movie. Make no mistake, though, it is a blast to watch. #PhoneItIn #DialItBlack #WhiteNoiseAnsweringMachine #Cashius #TheBrotherGuys

Saw, Sorry to Bother You: The Office X-Rated

Sorry to Bother You tells a story of a young man trying to work his way up the corporate ladder and finally “make it” in life. He’s surrounded by people trying to get him to see just how messy selling out to “the man” is, but he refuses to take heed. In the end, you have a story laced with political, social, and racial commentary that asks a lot of tough questions. I liked this film, for the most part. It was thought-provoking, and the cast did a good job portraying their characters. It went a little off the rails at the end, though, and I thought there was some unnecessary nudity. Don’t watch this around your kids; it’s not meant for them anyways! I’d recommend checking it out once it hits streaming services, but prepare yourself for some shock towards the end.