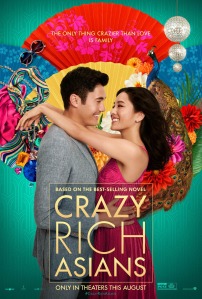 Just saw “Crazy Rich Asians” – Young’s Blood. Conclusion: 7/10. The postmodern romcom has been a dying breed of late, but “Crazy Rich Asians” is able to breathe some life back into the genre. Foregoing some of the typical tropes and reinventing others, the movie makes for a fresh and fun time. More than that though, the movie’s affinity for the culture and people it is depicting makes it hard to not join in. Certainly, the cast is equal parts charming and sassy. These movies rely heavily on the audience’s ability to fall in love with the couple and the ones that work well are especially affecting in this regard. The characters Rachel (Constance Wu) and Nick (Henry Golding) display excellent chemistry together and their romance is palpable. There are times where the movie, as the title might suggest, becomes a bit indulgent in the material riches that surround the characters. I wish in this regard it would have taken a bit more of a cynical stance on money and wealth within the dynamic between Rachel and Nick’s family. Those parts are a bit glossed over, but the conflict still works enough that the movie doesn’t stumble. Vividly colorful and earnestly funny, perhaps this marks the start of a turning point for romcoms in our time. #ChuGuyDontBotherMe #SingaporeFling #EconomNick #ThisRelationShipHasSailed #TakeADumpling

This movie gained traction due to its casting. There are only a few Hollywood films that feature an all Asian cast, and this was seen as a barrier-breaking film. But, is it any good? I thought so. I’m not a huge romcom fan, but I found myself engaged in the story the entire time. There were a few incredibly beautiful and well-done scenes that made it really enjoyable. Overall, it was pretty funny, but also tackled some pretty deep issues, i.e., parents demanding their children fit into a certain mold/way of life. This movie is well worth seeing while in theaters, if you can, or worth a rent/stream in the future.