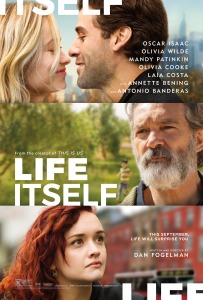 Just saw “Life Itself” – Family Shatters. Conclusion: 3/10. Melodramatic, excessively manipulative, and ill conceived, Life Itself fails in near totality. The opening scene is perhaps the most jarring thing I have seen in a movie. While the rest of the movie is not quite as insane, the choices, both stylistically and narratively, made by writer/director Dan Fogelman are bewildering and continually pull the viewer out of the movie. Perhaps the most glaring misstep is the movie’s emotional appeal. There are emotions in this movie. A lot of them. Unfortunately, they mean very little, and their effect is all but gone by the end of the first act. The use of death to evoke these emotions is rather beaten to death. It’s not a movie that feels particularly lived in or has anything grounded to some sort of reality. That’s not to say the movie ever feels inauthentic. I’d argue it is trying to be affecting and meaningful. However, there is far too much that is either half-baked or inexplicable for that to ever be achieved. #KnuckleSandwich #WetDreams #MyWifeLeftMe #DoubleWreckerBus #WhatAboutBobDylan

I was not at all prepared for this movie. The trailer doesn’t really give you too many insights into what this movie is about. There are so many things to say. I’ll start by saying the beginning was pretty weird and out of place. I wasn’t sure what we were in for, but thankfully after the first “chapter” things improved. This movie talks a lot about the interconnections of life and how our life stories are intertwined in so many different ways and events. Those events, at times, can be completely random and inconsistent, which fits exactly into what I’ve experienced in my life. This movie resonated so much with me because it talked a lot about what I’ve experienced and continue to experience. Yes, it’s gushy and the storylines comes together a little too neat and nice, but the overall message and emotion within this movie pushed me past those things. Bring your tissues and bring your comfort food – I certainly needed it!

It’s nice to have Olivia Wilde back in the movies. The first scene of this movie is terrible, and the first couple scenes are pretty over-the-top, which made me very concerned. But as the movie found a groove, I really started to enjoy it. There are a lot of times in the film where the editing gives you a look at a previous scene in a new way or is used to jump through time in a creative fashion. There are also a lot of good moments of emotion, and the movie makes you come to terms with how messy life is and how people are not simply good or bad. #helikesitheyMikey #savedbytheBella #Rigotrip #SamuelLChang #illWill #Abbyroad