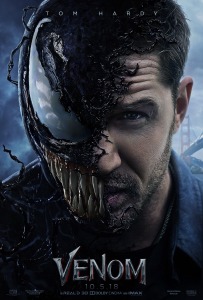 Just saw “Venom” – Love at First Parasite. Conclusion: 6/10. A mixed bag and something that struggles to pick a lane, Venom doesn’t quite want to make the jump to an R rating and can’t quite twist its narrative into something that fits. The first ten minutes or so are a bit of a mess. Coming in at well under two hours before the credits start, the movie would have benefited greatly from another 20 minutes or so, because the film’s maneuvering of things into their starting positions is far too choppy. The narrative is not totally for a loss; it just needed more sharpening. Riz Ahmed plays a Silicon Valley billionaire industrialist, think Elon Musk, who has his own plans to save humanity – and satisfy his massive ego – but only serves to endanger the planet further. It’s an interesting, and perhaps timely, idea for a villain, but he is too underdeveloped to be a fully dimensional character. Not alone in this regard, the biggest waste is probably Michelle Williams’s character. As the love interest, and she’s in desperate need of something to do. Even by superhero movie standards, she isn’t delegated much at all. Nonetheless, her presence in the film is still welcomed and enjoyable for what it is. The saving grace from a story perspective is the dynamic between Tom Hardy’s character and Venom. Their inner dialogue is the strongest writing the movie has to offer, and the humor is sharper and drier than the self-referential and sometimes annoying brand of humor that seems to infect most blockbuster movie anymore. Of course, the primary offering these movies offer is action. Overall, it’s probably the best thing Venom has to offer and the two main sequences – a motorcycle chase in downtown San Francisco and a fight between Venom and a SWAT team – I think are quite enjoyable. Really, it’s an entertaining movie and it doesn’t fail or annoy in any real manner. Unfortunately, it doesn’t quite rise to a place of its own. #NewKidOnTheBrock #DoggysDayOut #WeyingHerOptions #HitsCarlton #DontLoseYourHead #SymbiosisWithTheMostess

I’ve been pretty excited to see this movie since seeing the first trailer. I had read a few Venom comics as a kid. so I was glad to see him get his own movie. The critics can suck it. Yes, it had some bad plot points, and Michelle Williams character was pretty bad, but this movie was really entertaining. Tom Hardy did a great job with both the portrayal of Eddie Brock and the voice of Venom. I enjoyed the back and forth between Eddie and Venom. There were a lot of funny moments between to two of them and I enjoyed watching them “grow together.” The action sequences were very intense and fun to watch as well. It managed to make $80M this weekend, which is the record for highest weekend box office total in the month of October. So, check it out in theaters if you can. It’s worth seeing on the big screen.