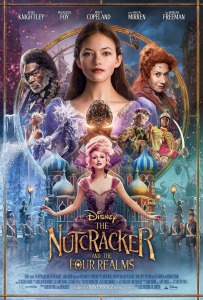 Just saw “The Nutcracker and the Four Realms” – Of Wind Up Mice and Men. Conclusion: 4/10. Disney’s recent live action re-imaginings of several animated classics and timeless stories has produced some decidedly mixed results. At the very least, the lavish costuming and elegant sets offer tantalizing visuals. Perhaps to be expected, “The Nutcracker” is no exception here. Unfortunately, as with some of the worse entries into this growing Disney catalog, the effort to make these stories look more real has largely resulted in them feeling less human. The nuts and bolts of “The Nutcracker” story are perfectly suitable, but it has the emotional resonance of a tin soldier. It’s all so suffocated by the Disneyness of it all. The crafting is so meticulous and happenings so guided that the movie never has any room to breathe. If the story is familiar, there needs to be something to make it feel important again. It’s something that “A Star Is Born” was able to accomplish so well earlier this year. For “The Nutcracker,” a sense of connection to the characters and their journey is what was glaringly absent. It was difficult to even recognize Keira Knightley in her role as the villainous Sugar Plum. She is so done up and constrained that no personality makes it through. Really, it’s a movie that feels about as hollow as the toys it’s trying to bring to life. #SugarDumb #ToyMeetsWorld #YouWannaGetNutsLetsGetNuts #SoullessMotherGinger #Gingerdead