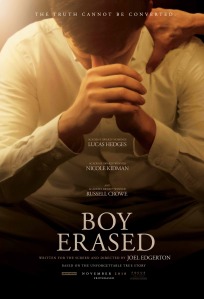 Recently saw “Boy Erased” – Son of a Preacher Man. Conclusion: 8/10. Movies like this have a difficult line to toe. Boy Erased follows the son, Jared (Lucas Hedges), of a Baptist preacher who is outed to his parents (Russell Crowe and Nicole Kidman) and forced to attend a conversion therapy program. It would be easy for the movie to feel more like a PSA on the evils and emotional trauma caused by these programs, but thankfully Boy Erased proves to be quite a bit more nimble. I found the emotional dynamic between Hedges, Kidman, and Crowe to be extremely well put together and it felt authentic to the struggles of reconciling uber-conservative faith with homosexuality. Hedges is phenomenal and seeing the hell he is put through in hopes of righting himself with God hits its darkly ironic mark perfectly. For their part, Kidman and Crowe match what Hedges offers emotionally, and though the movie paints them as misguided, it remains empathetic to the dissonance years of fundamentalist theology inspire when its bubble is pierced. I’m hesitant to ever label a movie “important”, but I’m not sure people quite understand how emotionally violent, abusive, and ineffective conversation therapy is. In this regard, it does have the flavor of a cause movie, but the emotional currents keep it from sulking in clichés. #ConversionOfTheTruth #TheBornTherapy #HeWentToJared #MarshallLaw #SykesThatsTheWrongNumber

‘Boy Erased’: Aversion Therapy (6/10) This movie looked really powerful going into it, and while it was mostly really well made, it just didn’t deliver as boldly as it should have. Based on a true story, the movie seeks to expose gay conversion therapy as a tormenting and ineffective experience. With that said, I was hoping this might be reminiscent of Spotlight, but it just didn’t feel intense enough of a story. There’s a big moment toward the end that seemed brushed over, when it could have been very emotional and powerful. Instead, it focused more on just the main character’s story, which is all right, but it didn’t carry enough weight for me. #getouted #hegotitwithJared #seizethgay #sonofapreacherman